2.1 Structure and function of the ventilatory system 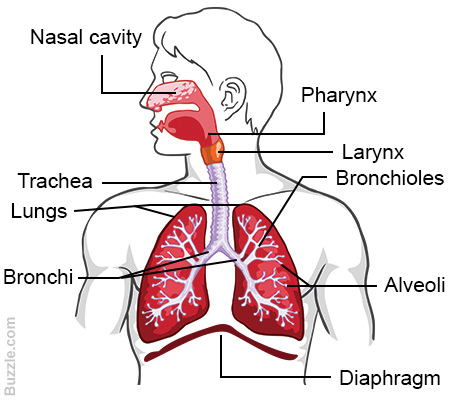 Nose,
mouth,
pharynx,
larynx,
trachea,
bronchi,
bronchioles,
lungs,
alveoli
2.1.2 Outline the functions of the conducting airways
Low resistance pathway for airflow
Defense against chemicals and other harmful substances that are inhales
Warming and moistening the air

Nose: Humidifies the air entering and filters particles (thanks to the Vibrissae).
Pharynx: Air then passes through the 3 parts of the pharynx which offers a low resistance path for airflow into the larynx and then finally into the trachea.
Larynx: In addition to its function as the 'voice box' it also protects the trachea from invasion of foods and fluids.
2.1.3 Define the terms:

2.1.4 Explain the mechanics of ventilation in the human lungs
Air flows because of pressure differences between the atmosphere and gases inside the lungs.
During inhalation the intercostal muscles (between the ribs) and diaphragm contract to expand the chest cavity.
The diaphragm flattens and moves downwards and the intercostal muscles move the rib cage upwards and out. - This increases the space for the lungs.
This increase in size decreases the internal air pressure and so air from the outside (at a now higher pressure than inside the thorax) rushes into the lungs to equalize the pressures.When we exhale the diaphragm and intercostal muscles relax and return to their resting positions. This reduces the size of the thoracic cavity, thereby increasing the pressure and forcing air out of the lungs.
2.1.5 Describe the nervous and chemical control of ventilation during exercise 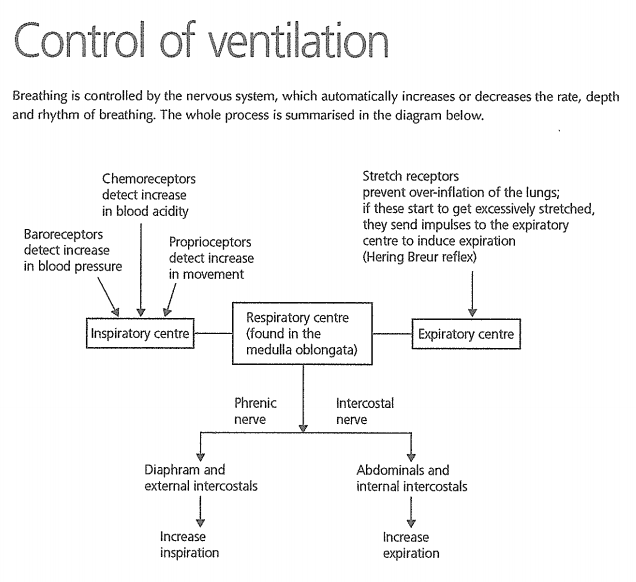 Why do ventilation rates increase

increase CO2 causes the acidity of the blood to increase (decrease blood pH)/a change in acidity of the blood is detected by chemoreceptors which send nerve impulses to the respiratory muscles which increase the rate of ventilation (faster/deeper);
2.1.6 Outline the role of hemoglobin in oxygen transport

98.5% of oxygen in the blood is transported by hemoglobin as oxyhemoglobin within the red blood cells

Hemoglobin is the protein that allows oxygen to bind to a red blood cell. Hemoglobin contains a central Iron ion which can hold up to 4 oxygen atoms per heme. These oxygen atoms are then diffused into the tissues once they reach their target. While they are diffusing they are also picking back up CO2 & returning it back to lungs so you can exhale it into the atmosphere.
2.1.7 Explain the process of gaseous exchange at the alveoli 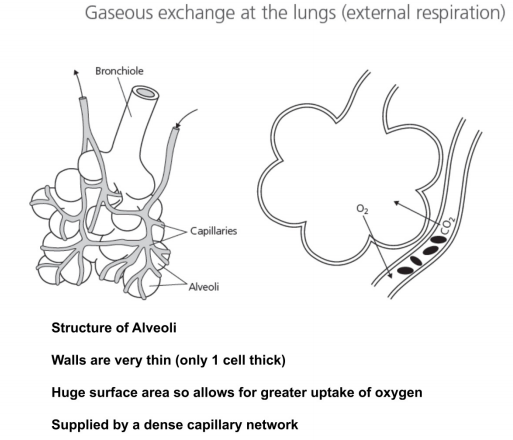 Gas exchange is carried out by a complex of structures at the end of each bronchioles.
The oxygen exchange in the lungs takes place across the membranes of small balloon-like structures called alveoli attached to the branches of the bronchial passages.
These alveoli inflate and deflate with inhalation and exhalation. The elasticrecoil of these helps in the exhalation. Gases move by diffusion from where they have a high concentration to where they have a low concentration:
The alveoli create a pressure gradient.
Once the alveoli fill up with air during inhalation the oxygen diffuses from the air in the alveoli and into the blood.
The carbon dioxide diffuses from the arriving venous blood and into the air which exits the body during exhalation.

2.2 Structure and function of the cardiovascular system

2.2.3 Describe the anatomy of the heart with reference to the heart chambers, valves and major blood vessels
2.2.4 Describe the intrinsic and extrinsic regulation of heart rate and the sequence of excitation of the heart muscles
Hormonal Control
2.2.6 Describe the relationship between heart rate, cardiac output and stroke volume at rest and during exercise 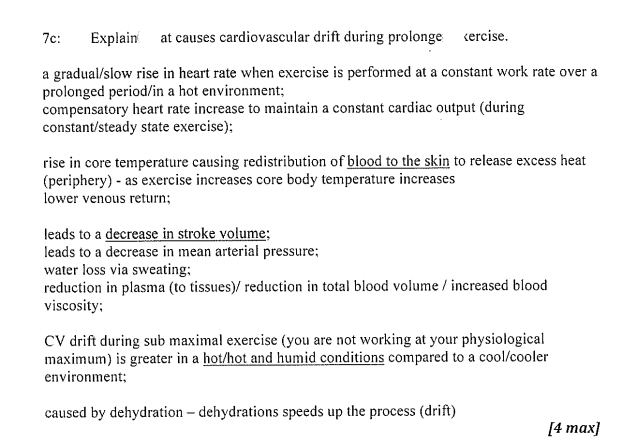 An increase of body temperature results in a lower venous return to the heart, a small decrease in blood volume from sweating. A reduction in stroke volume causes the heart rate to increase to maintain cardiac output.

Static Exercise (or isometric)
defined as a sustained contraction of a muscle group where the muscle is contracted but there is no change in muscle length: eg weight lifting, yoga

Why does Systolic blood pressure increase?
 Volume of blood + contraction rate a larger amount of blood is being pumped through the arteries with each contraction;

Why does Diastolic blood pressure increase?
 The pressure on the arterial walls is increased even during relaxation
 The vasoconstriction creates an increase in pressure
 Muscles squeeze the veins to promote venous return, by doing so increases pressure
 During static exercise, breathing is more constricted, there is less oxygen and more carbon dioxide, the heart must work harder to pump the blood it does have to supply the muscles with sufficient oxygen to continue the static exercise

Dynamic Exercise
Why does Systolic blood pressure increase at a lower rate?
 the breathing frequency is much higher than in static exercise, therefore the pressure is not as high as during static exercise

Why does Diastolic blood pressure remain the same?
 muscles are moving constantly, no added pressure on constant contraction
 you are constantly breathing, which allows carbon dioxide to be quickly expelled
 arteries are dilated as vasodilation is occurring
2.2.12 Compare the distribution of blood at rest and the redistribution of blood during exercise

Stroke Volume
- The increase in size of the heart enables the left ventricle to stretch more and thus fill with more blood.
- The increase in muscle wall thickness also increases the contractility resulting in increased stroke volume at rest and during exercise, increasing blood supply to the body

Resting Heart Rate
- As the stroke volume increases the cardiac output can remain constant, therefore enabling the resting heart rate to be lower.

Muscular Adaptations
- increased capillarization of the trained muscles.
- improvements in the vasculature efficiency

Fitness can be measured by the volume of oxygen you can consume while exercising at your maximum capacity. VO2 max is the maximum amount of oxygen in milliliters, one can use in one minute per kilogram of body weight. Those who are ‘fitter’ have higher VO2 max values and can exercise more intensely than those who are not as well conditioned.
2.2.15 Discuss the variability of maximal oxygen consumption in selected groups
2.2.16 Discuss the variability of maximal oxygen consumption with different modes of exercise

Numerous studies show that you can increase your VO2 max by working out at an intensity that raises your heart rate to between 65 and 85% of its maximum for at least 20 minutes three to five times a week.
Powered by