3.1.4: Identify a diagram representing the basic structure of a glucose molecule

Monosaccharide + mono/di/poly = di/poly + water (bye-product)
3.1.6: State the composition of a molecule of triacylglycerol
3.1.7: Distinguish between saturated and unsaturated fatty acids
3.1.8: State the chemical composition of a protein molecule
C: 1
H: 1
O: 1
N: 1
3.1.9: Distinguish between an essential and a non-essential amino acid
Essential amino acids cannot be made by the body. As a result, they must come from food. 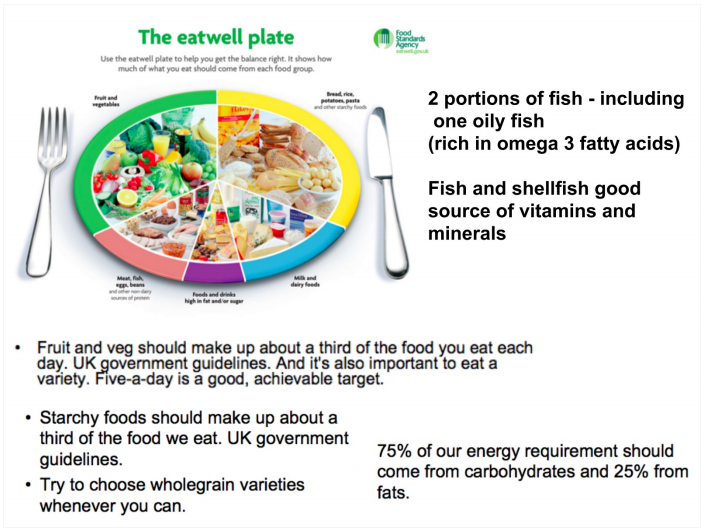 •Depending on intensity and duration of exercise, an athlete may regularly expend twice as much energy as a sedentary person. Furthermore, many sports are performed in environments that can increase energy expenditures (cold, humidity, altitude).
•Consequently, sporting activities can involve additional energy expenditure ranging from around 1,000 kilocalories/day (dancing, martial arts) to as much as 7,000 kilocalories/day (long-distance cycle races, endurance treks).
•During prolonged, aerobic exercise, energy is provided by the muscle glycogen stores – which directly depend on the amount of carbohydrates ingested.
•This is not the only reason why dietary carbohydrates play a crucial role in athletic performance; they have also been found to prevent the onset of early muscle fatigue and hypoglycaemia during exercise.

•By keeping carbohydrate intake high, an athlete therefore replenishes his glycogen energy stores, and reduces the risk of rapid fatigue and a decline in performance.
•At the same time, carbohydrate intake should not be so high as to drastically reduce the intake of fat, because the body will use fat as a substrate once glycogen stores are depleted.
•The use of body protein in exercise is usually small, but prolonged exercise in extreme sports can degrade muscle, hence the need for amino acids during the recovery phase.

3.2.1: Outline:
metabolism: all the biochemical reactions that occur within an organism, including anabolic and catabolic reactions
anabolism: energy requiring reaction whereby small molecules are built up into larger ones
catabolism: chemical reaction that break down complex organic compounds into simpler ones, with the net release of energy
anaerobiccatabolism: the breakdown of complex chemical substances into simpler compounds, with the release of energy, in the absence of oxygen.
3.2.2: State what glycogen is and its major storage sites

Glucose is converted into glycogen when the glucose levels are too high - glycogen is stored glucose
Glycogen is a much-branched polymer of glucose (polysaccharide)
The main stores of glycogen in the body are in the liver and muscles.

3.2.3: State the major sites of triglyceride storage
adipose tissue (fat) and skeletal muscle
3.2.4: Explain the role of insulin in the formation of glycogen and the accumulation of body fat 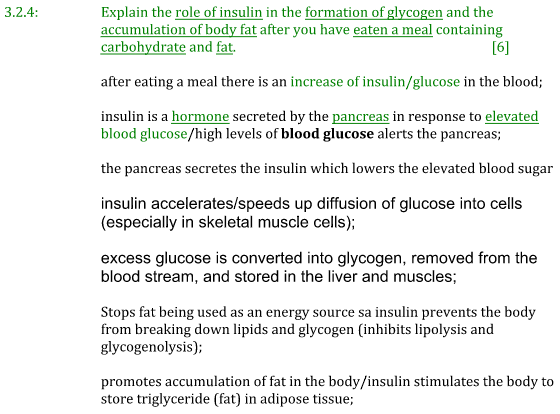 3.2.7: Explain the role of insulin and muscle contraction on glucose uptake during exercise 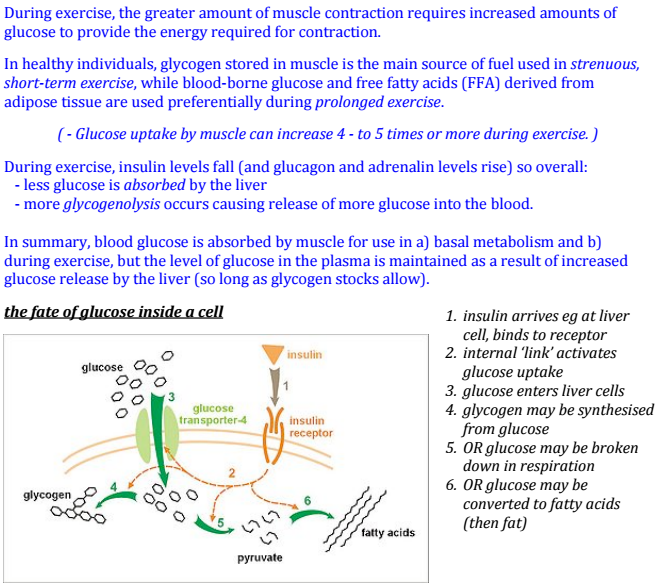 3.3.1: Annotate the ultrastructure of a generalized animal cell
3.3.2: Annotate the ultrastructure of a mitochondrion
3.3.3: Define the term Cell Respiration
The controlled release of energy in the form of ATP from organic compounds in cells.
ATP = chemical compound which provides energy for muscle contraction
Carbohydrates, fats and proteins (MACRO nutrients) can all be used as fuel in cellular respiration

A comparison between aerobic respiration and anaerobic respiration
Energy systems
All movement requires a series of coordinated muscle contractions, which in turn requires a supply of energy. For movement to occur the body must transfer stored chemical energy to mechanical energy. The chemical energy requirement of a cell is supplied by the breakdown of adenosine triphosphate (a high energy compound).
Movement = chemical energy --> mechanical energy
3.3.4: Explain how adenosine can gain and lose a phosphate molecule
Adenosine triphosphate (ATP) is the only usable form of energy in the body. The energy we derive from the foods that we eat (eg. carbohydrates) has to be converted into ATP before the potential energy in them can be used. ATP consists of one molecule of adenosine and three molecules of phosphate.

Energy is released from ATP by breaking the bonds that hold the molecules together.
3.3.5: Explain the role of ATP in muscle contraction
Many chemical reactions in the cell use the energy from stored ATP, which is released when the phosphate bonds of ATP are broken.
ATP --> ADP + P
ATP changes to ADP + P, causing the myosin heads to change their angle. The heads are now 'cocked' in their new position, where they store potential energy for muscle contraction from the ATP
3.3.6: The ATP-PC System
Phosphocreatine (PC) is an energy-rich phosphate compound found in the sarcoplasm of the muscles. It is readily available, and is important for providing contraction of high power, such as the 100 meters sprint or in a short burst of intense activity during a game, for example a serve followed by a sprint to the net in tennis, or a fast break in basketball. However, there is only enough PC to last for up to 10 seconds and it can only be replenished when the intensity of the activity is submaximal.
The ATP-PC system regenerates ATP when the enzyme creatine kinase detects high levels of ADP. It breaks down the phosphocreatine to phosphate and creatine, releasing energy in an exothermic reaction:
phosphocreatine (PC) --> phosphate (Pi) + creatine (C) + energy
This energy is then used to convert ADP back into ATP (an endothermic reaction):
energy + ADP + Pi --> ATP
This breaking down of PC to release energy, which is then used to convert ADP into ATP, is a coupled reaction. For every molecule of PC broken down, enough energy is released to create one molecule of ATP.  (1:1 ratio, PC:ATP)
Advantages of the ATP-PC system
Disadvantages of the ATP-PC system
3.3.7 The Lactic Acid System (anaerobic glycolosis)
Once PC is depleted, the lactic acid system takes over and ATP is regenerated for the breakdown of glucose. Glucose is stored in the muscles and liver as glycogen. Before glycogen can be used to provide energy to make ATP, it has to be converted to glucose. This process is called glycolosis and the lactic acid system is sometimes referred to as anaerobic glycolosis, due to the absence of oxygen.

In a series of reactions, the glucose molecule is broken down into two molecules of pyruvic acid. In the absence of oxygen, pyruvic acid is then converted to lactic acid. The main enzyme responsible for the anaerobic breakdown of glucose in phosphofructokinase (PFK), which is activated by low levels of phosphocreatine and increased levels of calcium (released from the sarcoplasmic reticulum during muscle contraction). The energy released from the breakdown of each molecule of glucose is used to make two molecules of ATP.
3.3.9: The Aerobic System
This system breaks down glucose in the presence of oxygen into carbon dioxide and water. It is much more efficient than the anaerobic systems - the complete oxidation of glucose produces up to 38 molecules of ATP in the three stages.
Glycolosis
This process is the same as anaerobic glycolosis but it occurs in the presence of oxygen. Lactic acid is not produced; instead the pyruvic acid is converted into a compound called acetyl coenzyme 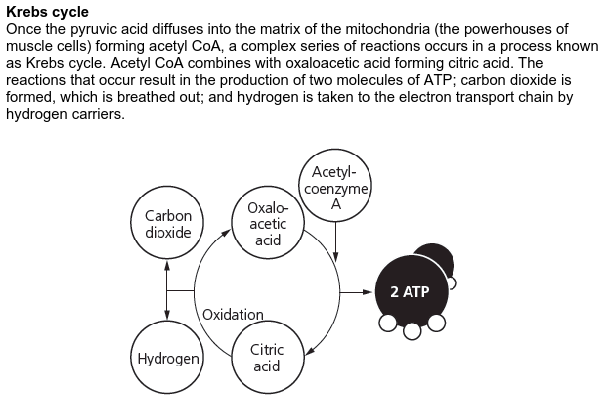 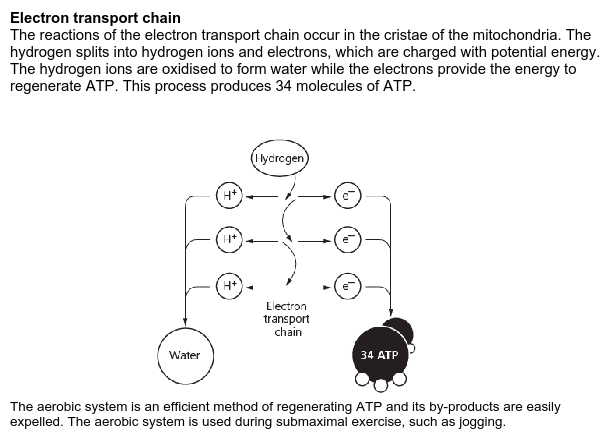 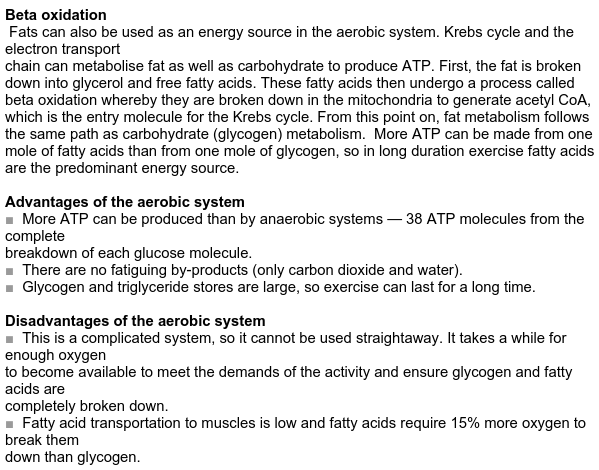 3.3.10: Discuss the characteristics of the three energy systems and their relative contributions during exercise 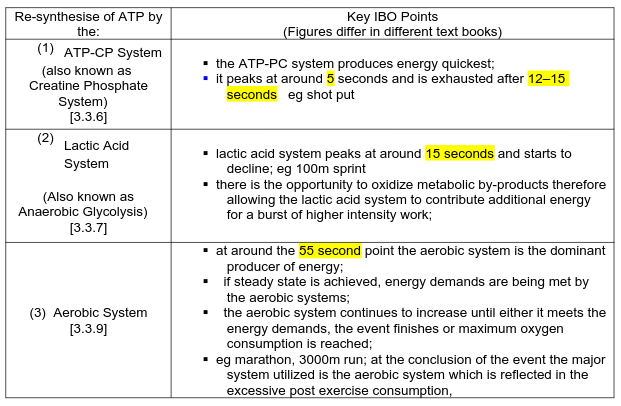 3.3.11: Evaluate the relative contributions of the three energy systems during different types of exercise

When we start any exercise, the demand for energy rises rapidly. Although all three energy systems are always working at the same time, one of them will be the predominant energy provider. The intensity and duration of the activity are the factors that decide which will be the main energy system in use.