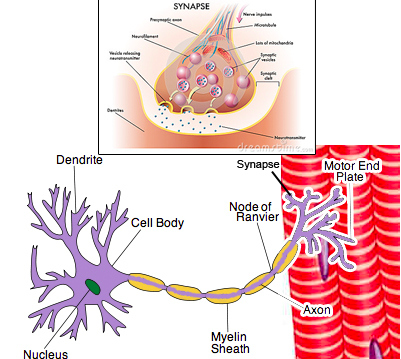 4.1.2 Explain the role of neurotransmitters in stimulating skeletal muscle contraction

Neurotransmitters are chemicals that are used for communication between a neuron at the synapse and another cell. Acetylcholine is the primary neurotransmitter for the motor neurons that innervate skeletal muscle and for most parasympathetic neurons. It is generally an excitatory neurotransmitter, but it can have inhibitory effects at some parasympathetic nerve endings, such as the heart. In biochemistry, cholinesterase is an enzyme that catalyzes the hydrolysis of the neurotransmitter acetylcholine into choline and acetic acid, a reaction necessary to allow a neuron to return to its resting state after activation.
4.1.3 Explain how skeletal muscle contracts by the sliding filament theory

4.1.4 Explain how slow and fast twitch fibre types differ in structure and function
Slow-twitch, or type I, fibres have more mitochondria, store oxygen in myoglobin, rely on aerobic metabolism, have a greater capillary to volume ratio and are associated with endurance; these produce ATP more slowly.

Fast-twitch, or type II, fibers have fewer mitochondria, are capable of more powerful (but shorter) contractions, metabolize ATP more quickly, have a lower capillary to volume ratio, and are more likely to accumulate lactic acid.

Isometric Contraction
In general in this form of contraction the muscle length remains constant. It occurs when muscle force balances resistance and no joint movement occurs
4.2.3 Explain the concept of reciprocal inhibition

When an agonist contract to move a body segment, it is usual for the antagonist (the muscle with the opposite concentric contraction action) to relax. This means that the agonist is not being opposed by any muscle torque acting in the opposite direction of the motion. This is an automatic action controlled by neurons. When the agonist motoneuron is stimulated the motoneuron to the antagonist is inhibited preventing it from contacting strongly
4.2.4 Analyze movements in relation to joint action and muscle contraction

The pain and stiffness felt in muscles several hours to days after unaccustomed or strenuous exercise.
*brought on by eccentric contractions of the muscle causing pressure at the nerve endings.

4.3.1 Define the terms:
force: a push or pull on an object
speed: maximum rate at which a person is able to move their body
velocity: rate at which an object changes position
displacement: distance measured in a stated direction
acceleration: rate of change of velocity (speed/direction) per second
momentum: the amount of motion possessed by a moving object
impulse: force x time. The motion (momentum) of a body depends not only on the force, but also the duration (time) the force is applied
4.3.2 Analyze velocity-time, distance-time, and force-time graphs of sporting actions
4.3.3 Define the term center of mass
the point at which the body is balanced in all directions
4.3.4 Explain that a change in body position during sporting activities can change the position of the center of mass
4.3.5 Distinguish between first, second and third class levers
4.3.6 Label anatomical representations of levers
Fulcrum = the joint
Resistance = body part to be moved
Effort = muscle pull at the muscle insertion

123 FRE (referring to what is in the middle)
4.3.7 Define Newton's three laws of motion
4.3.8 Explain how Newton's three laws of motion apply to sporting activities
First Law (Law of Inertia)
An object will remain at rest or constant velocity unless acted upon by an external force.
Example: An athlete at a starting block will not move unless a force acts upon them. The external force comes from the block and this propels the sprinter out of the blocks when they exert a downward and backward force against the blocks.

Third Law (Law of Reaction)
For every action there is an equal and opposite reaction
Example: The sprinter applied downward and backward force on the immovable starting blocks, they exert back with a forwards and upward reaction force on the sprinter, pushing the sprinter forwards. The harder the sprinter pushes, the greater the reaction force will be.
4.3.10 Explain the concept of angular momentum in relation to sporting activities
4.3.11 Explain the factors that affect projectile motion at take-off or release
Projectiles are: objects or athletes that are propelled in the air

Influences
4.3.12 Outline the Bernoulli principle with﻿ respe﻿ct to projectile motion in sporting activities
Powered by