B.1 Individual differences
B.2 Motivation
B.3 Mental preparation for sport
B.4 Psychological skills training

B.1.1 Define the term personality
“Those relatively stable and enduring aspects of individuals which distinguish them from other people, making them unique but at the same time permit a comparison between individuals”. (Gross, 1992)
B.1.2 Discuss social learning theory and personality 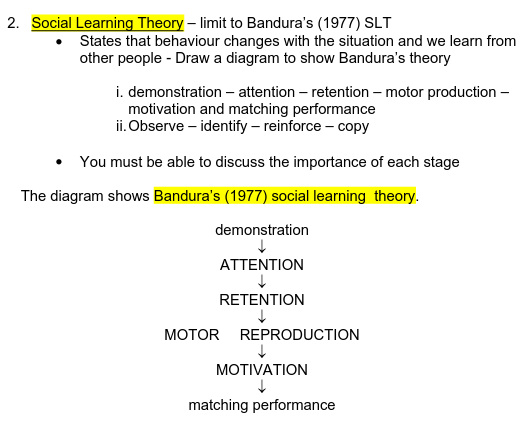 B.1.3 Discuss the interactionist approach to personality

B.1.4 Outline issues with the measurement of personality

B.1.5 Evaluate the issue in personality research and sports performance
Consider
athletes versus non-athletes: may discourage non-sportspeople from attempting sports that don't 'fit' their personality
personality and sport type: if a personality is assigned to a sport, those not demonstrating will be less likely to take up the sport as they do not think that they suit the stereotype of the sport.
predicting performance: implications of predicting performance, rather than it be a natural progression and taking into consideration environmental factors

Relates strongly to personality - the degree to which a player accepts the prospect of a challenge in sport; aka an individuals motivation to strive for success. It is the extent to which we approach and welcome challenge and competition, or avoid competitive situations.

Achievement Goal Theory refers to how people evaluate/judge their competence and define successful accomplishments. It refers to personal interpretations they have about what achievement means to them within a specific task.

According to this theory, three factors combine to determine motivation:

B.3 Mental Preparation for Sport

B.3.1 Define the term arousal

Arousal is an alertness or state of reediness (ranging from deep sleep to intense alertness) of the body for an action
It is neutral and can be triggered by both pleasant/positive and unpleasant/negative situations
It is how motivated/interested/excited an athlete is prior to and throughout the performance
B.3.2 Describe the theoretical approaches to arousal
B.3.3 Draw and label a graphical representation of the arousal performance relationship. 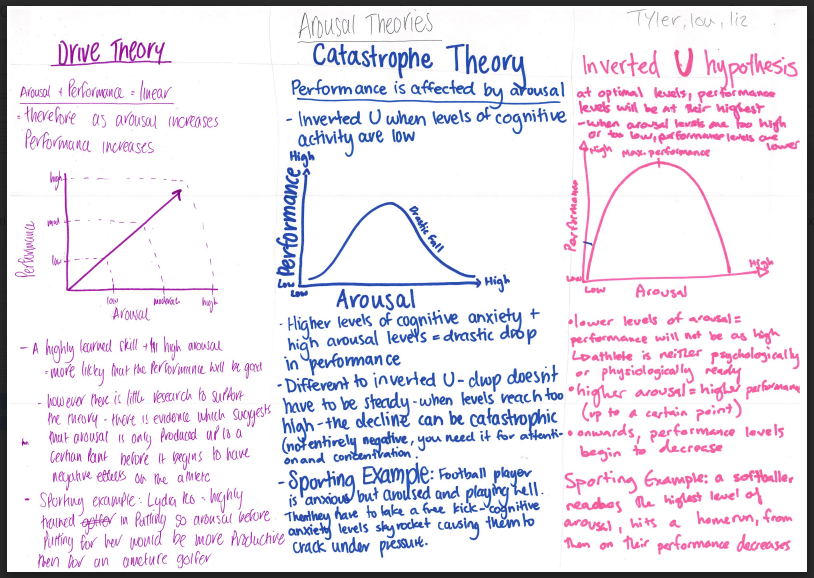 B.3.4 Discuss the emotions that may influence an athlete’s performance or experience in a physical activity 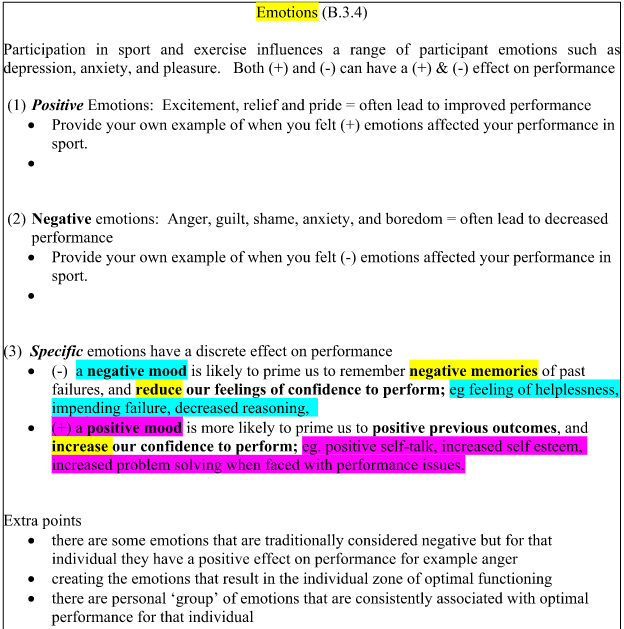 B.3.5 Define the term anxiety

Anxiety is a negative emotion of apprehension and tension (stress) which includes irrational thoughts, fear of failure, self doubt and worry
There are two types:
B.3.6 Distinguish between cognitive and somatic anxiety 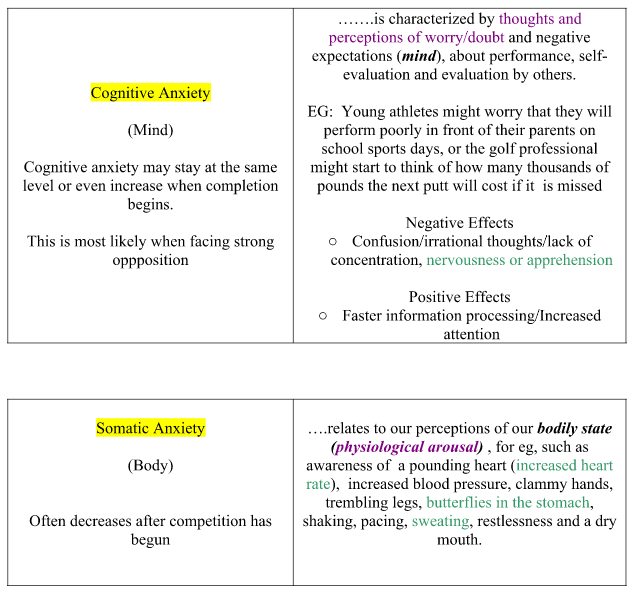 B.3.7 Distinguish between trait and state anxiety 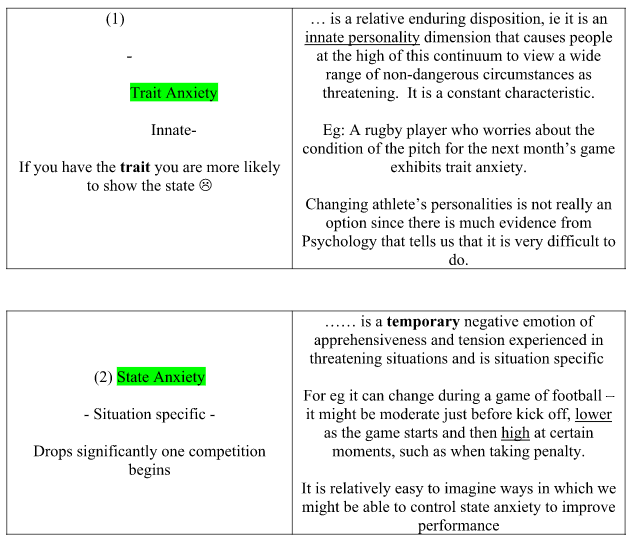 B.3.9 Describe the stress process in sport 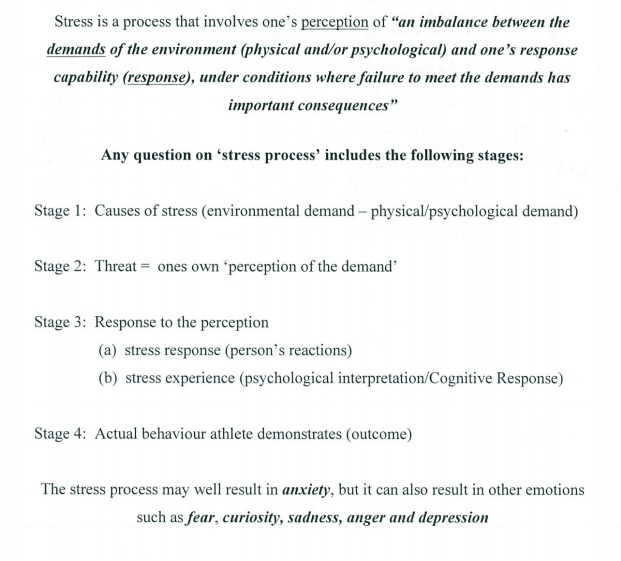 • Can promote both physical and cognitive relaxation
– Centering
• A term often associated with meditation, centering is, simply put, taking the time to be in the moment, to focus and calm yourself.
You can center yourself in just a few minutes, and by doing so regularly you'll find that you can go within to take a break whenever you need it.
– Progressive Muscular Relaxation (PMR)
– Meditation
B.4.5 Outline self-talk techniques

Discuss how a sport coach uses social learning theory when using demonstrations as a learning tool.

Social learning theory (SLT) was created by the psychologist Albert Bandura and explains the concept of the acquisition of knowledge and skills. SLT supports the concept that personality is not an innate set of characteristics, unlike the trait theory created by Allport. SLT claims that personality is learned by active viewing. There is a necessity of a role model, for which the process of the learning takes place. The stages start from a demonstration done by the role model, by which the viewer and the learner follows through with attention, retention, motor reproduction, and motivation before they finally match the skill demonstrated.
For the demonstration to be successful when coaching athletes the role model or the demonstrator has to be respected or admired by the learners. Whereas a famous athlete would work, a coach that is respected or a fellow successful teammate will also stimulate attention from the watching athletes, which is the first stage of demonstrative learning.
For the process to continue working, the performers must be able to retain the observed skill in their memory, which is known as retention. A coach must ensure that the length and complexity of the skill is fitting to the level of the performers. For instance, if a player is in the cognitive stage of learning to play the sport of touch, the skill the coach teaches to the athletes should be something such as placing the ball on the ground when touched. This skill forms the basis of the sport, and is what is shaped into more complex moves as the players improve. However, if coaching player at the top end of the associative stage, the players may learn a complicated move that involves multiple touches by demonstration. As the associative stage describes the ability to filter out relevant and irrelevant material due to selective attention, the athletes, paired with their improved skill level, will be able to appropriately learn this new skill.
The coach must also take into consideration the athlete's physical ability to reproduce the skill, which is known as motor reproduction. The players must have to physical fitness required to perform the skill. TIme may also be needed by the players to fully comprehend the new skill, especially if it is complex and has many steps. For this the coach may demonstrate the skill more than once. Another good technique the coach could use is to allow the participants to attempt the new skill themselves after the demonstration, and then afterwards show the demonstration again, pointing out error that the players made and ways to produce the skill successfully.
The final stage that leads to the ability to reproduce the learned skill accurately is motivational response. For any of the three stages above, the performer must be motivated, and want to learn new skills. This motivation may come internally, or can be enforced through feedback from the coach or praise when the skill or an aspect of the skill is done correctly. The coach can aid this motivation by allowing the performer a sense of achievement by feeding back extrinsically in a positive manner to the players.
After the demonstration and these stages of learning based on observation, which is social learning theory, the player may successfully match the performance of demonstrator. Demonstration is a favored teaching method of coaches, as many people learn visually. Players may also learn kinesthetically and the stage of motor reproduction that SLT allows will assist these participants in the acquisition of the new skill. If the coach understand the theory, it can be a very successful way to teach new skills to players of all levels.
Powered by