Principle: we are information processors
Study: Craik and Lochart (LOP)

Principle: we are information processors
Study: Craik and Lochart (LOP)

Intro:
·             The cognitive level of analysis is based on how mental processes such as perception, attention, language, memory and thinking in the brain processes information.
·             It concerns the way we take in information from the outside world, how we make sense of that information and what use we make of it.
Cognitive processes are influenced by social and cultural factors

Discuss how and why particular research methods are used at the cognitive level of analysis (for example, experiments, observations, interviews).

Intro: cognitive LOA is focused around the mind. Unlike sociocultural, research methods can be more focused with a smaller sample. As a cognitive process is memory and therefore the investigations are less focused on how people interact in the presence of others. Two commonly used research methods are Lab experiments and case studies.

+ can be repeated, results tend to be more reliable
+ controlled environment, removes confounding variable
+ isolation of IV and DV give a clear cause and effect relationship
+ can be generalized to a certain extent
+ data easily measured
- low in ecological validity
- may break ethical guidelines (participants are often unaware)
- lower generalizing potential
- possibility of demand characteristics

Conclusion: Both types of research method achieves different types of results. Both have pros and cons.

Discuss ethical considerations related to research studies at the cognitive level of analysis.

Evaluate two models or theories of one cognitive process (for example, memory) with reference to research studies.

With reference to relevant research studies, to what extent is one cognitive process reliable (for example, reconstructive memory, perception/visual illusions, decision making/heuristics)?


Implications and Conclusion:
Brains and memories can be fabricated. There are many things that can change our memories. If something so simple as a change in a verb in a question can change important facts, it suggest that eye witness testimonies are not very reliable. The cognitive process of memory is easily manipulated if one knows how to, which can be very dangerous in changing people realities and creating reconstructive memory. There are many more studies that suggest the malleable nature of memories.

Discuss the use of technology in investigating cognitive processes (for example, MRI scan in memory research, fMRI scans in decision making research).

Intro:
Technology can illuminate cognitive processes that could only he hypothesized with other research methods. MRIs can be used to look at memory. This is showcased in Maguire's study on the London Taxi Drivers in the investigation of the amount of the grey matter that they have in their hippocampi which is related to memory.

Give a balanced overview

Results:
·            An MRI scan can be used to detect active areas of the brain and relation of cognitive processes with a part of it

Conclusion: The requirement of learning all of the maps (which is the environmental process) changes the physiological process of  the amount of grey matter present in the hippocami of the brain. MRIs are able to illuminate clear differences in size between the control and experimental groups. This shows the relationship between the grey matter, and essentially the hippocampi, and the ability to memorize numerous maps.

To what extent do cognitive and biological factors interact in emotion (for example, two factor theory, arousal theory, Lazarus' theory of appraisal)? 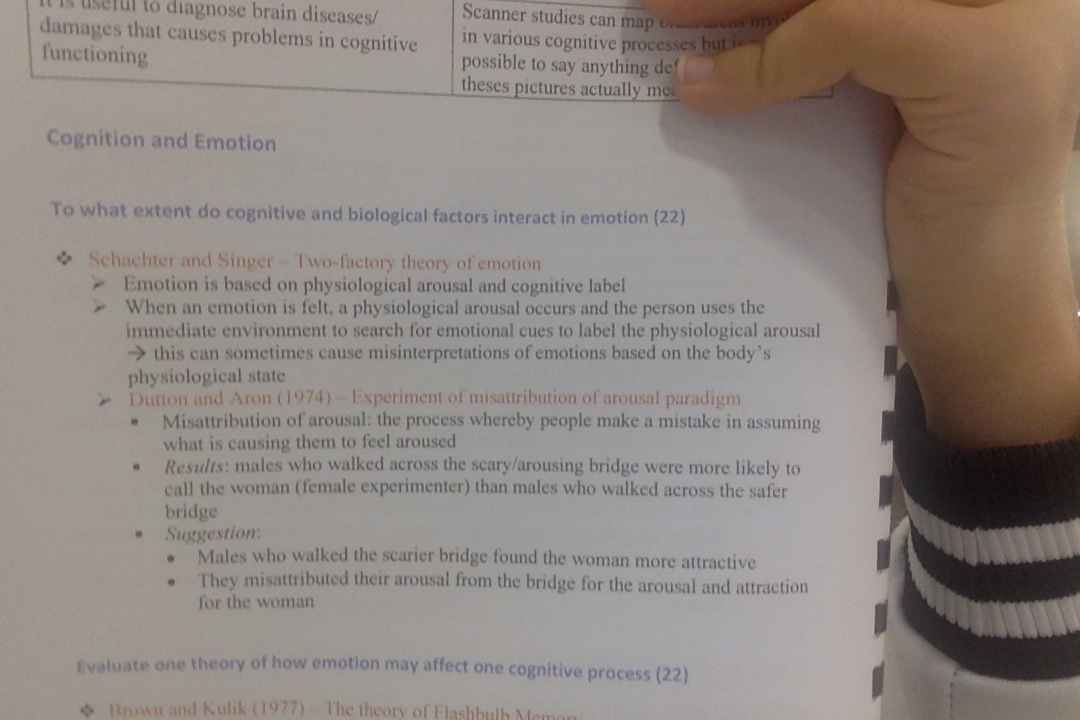 Evaluate one theory of how emotion may affect one cognitive process (for example, state-dependednt memory, flashbulb memory, affective filters).