5.1 The characteristic and classification of skill
5.2 Information processing
5.3 Principles of skill learning

5.1 The characteristics and classification of skill

5.1.1 Give a definition of Skill
The consistent production of goal-oriented movements, which are learned and specific to the task.
5.1.2 Describe the different types of skill
cognitive: Ability to solve problems by thinking
perceptual: Process by which you sense things and interpret them
motor: A voluntary body movement with a predetermined end result
perceptual-motor: Involve the thought, interpretation and movement skills
5.1.3 Outline the different approaches to classifying motor skills

Individual - Coactive - Interactive
5.1.5 Outline ability
Ability refers to a general train or capacity of the individual that is related to the performance and performance potential of a variety of skills or tasks

Perceptual Abilities
Way in which we notice significant things that are happening around us and how quickly and effectively we make decisions about how to deal with them.
For example it is the way in which:
1.     You make sense of the information you receive from the environment ie. to perceive it, interpret it and identify elements in it which are important, for eg. whether the ball is spinning or not, what the flight path of the shuttle is, whether there is a gap in the defence which can be exploited.
2.     Recognition and interpretation relies on previous experience and memory of that experience.
3.     Decision making decide what to do - muscles then need to carry out the required movement.

Brain identifies that a stimulus is present. It often detects more stimuli than we are aware of. If we attend to that information even briefly, then it is passed further through the process


Sporting example: Returning a tennis serve
Detection: the ball is tossed above the head rather than slightly in front, stimulus ranges from spin and flight path of the ball. These important stimuli stand out from background noise of irrelevant detail through selective attention
Comparison: the stimulus is passed through the memory and compared with similar codes stored in the memory such as a previous serve from the same opponent in the match
Recognition: occurs when the code of incoming information matches a code stored in the long term memory. Early signal detection detects the type of service before the action takes place. Utilizing selective attention and using past experiences improves signal detection.
5.2.5 Distinguish between the characteristics of short-term sensory store, short-term memory and long-term memory
5.2.6  Discuss the relationship between selective attention and memory
and explain how it can be applied to a games player

Memory can be described as “the capacity that permits organisms to benefit from their past experiences” (Tulving 1985). It is the skill of storing all previous occurrences in the long term memory of the brain where retrieval is permitted in future experiences. Selective attention however, is the type of memory where you can only focus on one thing (no multitasking) (Welford 1968) or on two things that require different area of the brain (Wickens 1980). Memory and selective attention play a role in the competitive play of sport, where performers must recall and retrieve knowledge from the long-term store of their memory, but utilize the skill of selective attention in order to only recall the memories vital for the skill and performance being done in the moment. Selective memory is used not only in sport, but in all parts of life as a human can not possibly pay attention to everything in a ocean of irrelevance and unimportance. In a touch game when performing an attacking line move for example, you may remember all of the training you have done on the skill and other variations of the move, but with the aid of selective attention, you recall and only think about where you have to go, in the position you are in and the situation you are in.

Rehearsal: required to get information into LTM, and to increase the chances of being able to recall that information.
coding: information associated with images can be recalled better with the associations
brevity: it is easier to remember short and specific details rather than long and vague information
clarity: if the information is clear and understood, it will be easier to remember
chunking: To some degree we do this automatically.  It is literally a case of chunking several pieces of information into one meaningful chunk, which takes up less space in STM
organization: if the information is in a clear and logical format it makes it easier for recall
association: semantic understanding increases recall
practice: same with rehearsal
5.2.8 Define the term response time
Response time = reaction time + movement time

In sprinting:
Reaction time: is the amount of time between a stimulus and the first movement initiated response to it. Does not include movement time. Eg. hearing the gun to pushing against the blocks.
Movement time: is the time taken to complete the task after it has been initiated. Begins when the body begins to move - not when then stimulus is applied - and ends when the task is completed. Eg. pushing against the blocks to hitting the tape.

Response time: total time from the presentation of stimulus to the completion of the task. Eg. hearing the gun to hitting the tape. 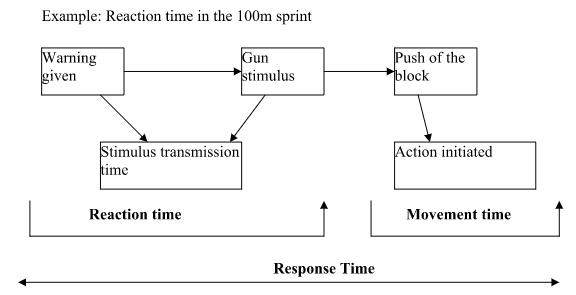 5.2.10 Evaluate the concept of the psychological refractory period (PRP)
5.2.11 Describe a motor programme

A motor program is a set of movements that that is stored in the memory and can be reproduced to create movements. Motor programs contain subroutines, which breakdown the actions required in a sport. For example in touch, the action of doing an A-Drive, can be broken down into subroutines, consisting of taking the touch, placing the ball, stepping over the ball, and then picking up. As the skill level of the performer increases, and the proficiency of the athlete does as well, the routines then become subroutines, as they begin to make up more complex skills within the sport. An example of this would be the A-Drive being then incorporated into a 42, where a backdoor component is added.

5.2.12 Compare motor programmes from both open and closed loop perspectives
5.2.13 Outline the role of feedback in information processing models

intrinsic (self given) and extrinsic (given by others eg. coach)
knowledge of results (was there a goal or was it a miss) and knowledge of performance (correct technique, improper technique)
positive (encouragement) and negative (un-constructive)
concurrent (during the task itself) and terminal (after task completion)
5.2.14 Outline the role of feedback with the learning process

5.3.1 Distinguish between learning and performance


5.3.4 Discuss factors that contribute to the different rates of learning
Physical maturation
physical fitness
individual differences of:
5.3.5 Define the concept of transfer

5.3.7 Outline the different types of practice 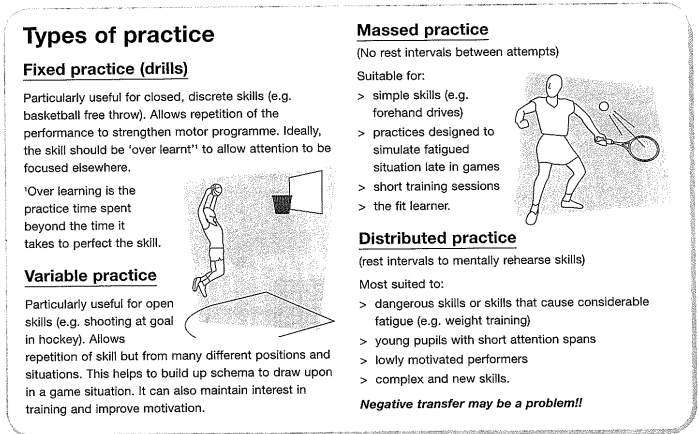 5.3.8 Explain the different types of presentation 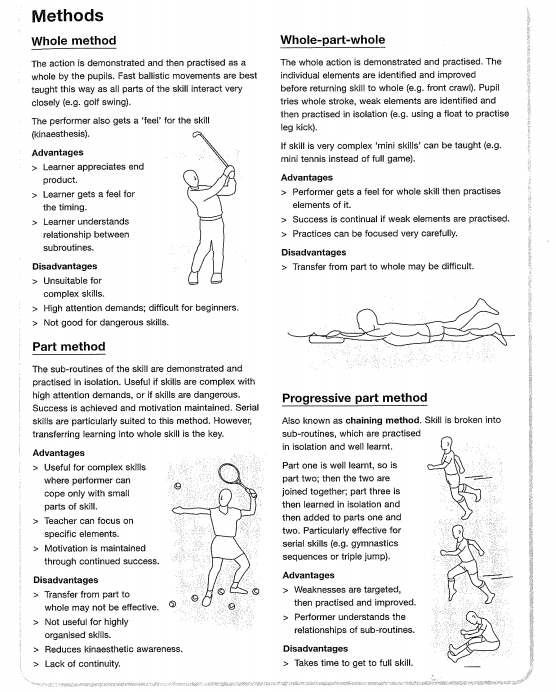 5.3.9 Outline the spectrum of teaching styles
Powered by